There are countless ways to use any platform and Google Tag Manager (GTM) is no exception. When you’re working with any system that creates and organizes data, several GTM implementations can lead to the same result. Let’s take a look at expanded and abstract:

You might be tempted to think that there’s no reason to learn the intricacies of what’s possible or to assemble your definitions in any other way than the most basic form. A lot of GTM implementations that we see are expanded. They describe every detail separately, creating several tags and triggers.
Expanded has its advantages. It’s easier for novices to edit, it requires almost no development knowledge and it’s more straightforward to fine-tune very small details because everything is manual. A separate tag for each button in a tab bar lets you omit the tabs that don’t interest you or filter your collection of data under different conditions.
Different triggers are needed to differentiate clicks on different icons so that different tags can deliver the correct data to Google Analytics. 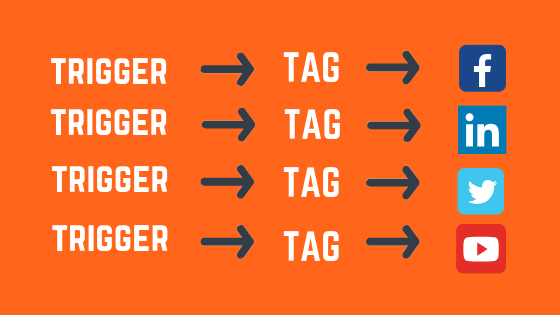 The difference between expanded and abstract implementations are in less-observable qualities. Examples of this include how quickly they can be implemented, how clearly they express the idea of what’s being accomplished and how easily they can be changed.
Often you have enterprise-scale systems from which you’re trying to collect enterprise-scale quantities of data. An expanded implementation can quickly become a manageability nightmare. If your tab bar has five buttons, a single tag with a single trigger can accomplish the same job as five tags with five corresponding triggers.
A little custom programming makes this possible, as long as you’re willing to lock in certain assumptions. Additionally, if a sixth tab is added, the single tag can take up the task of tracking it automatically without any changes made within GTM. The custom programming is added to a GTM variable, often in the form of a custom JavaScript function.
The trigger doesn’t need to differentiate which icon is clicked because a variable delivers dynamic data to Google Analytics. 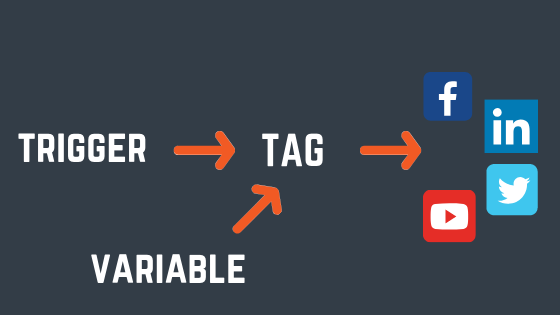 Moreover, if you’re looking for advanced filtering or transformation, you can actually write it into the programming that runs the single tag. The more advanced you’re willing to get, the more access GTM can achieve. JavaScript written in GTM runs on the page, so it has access to any Application Program Interfaces (APIs) that are exposed to the page. If you’re working with developers, you can even have them provide you with APIs that send you underlying data which you couldn’t otherwise access through out-of-the-box GTM tools such as interaction with a custom-built Google Map.

Need help implementing tag manger on your site? Get in touch with us today.

View Previous Item A Series on Logo Design, Part 3: Using Your Logo Correctly And Enforcing Its Application ::
See All Posts
View Next Item What is Sonic Branding and Why Should I Care? ::
See All Posts